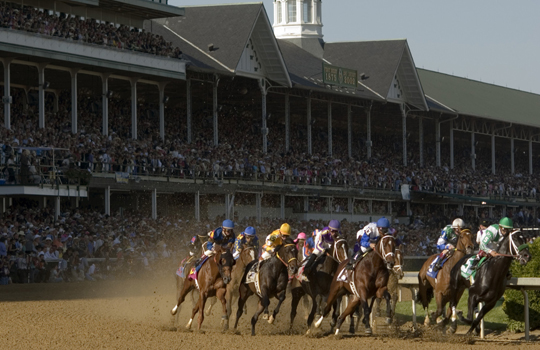 This weekend sees the 141th running of the $2 million Kentucky Derby take place at Churchill Downs, Louisville and it promises to be one to remember.

Known as “The Most Exciting Two Minutes in Sports” for its approximate duration, The Kentucky Derby dates back to 1875 and has been run every consecutive year since.  To earn a spot in the starting gate, a horse must first travel along the Road to the Kentucky Derby – a series of 35 designated races at tracks across the country and around the world.  Points are awarded to the top four finishers in each race.  The 20 horses with the most points at the end of the 35 races will earn a spot in the starting gate on the first Saturday in May.

This year bookies are insisting that it will be a two horse race – American Pharoah, the favourite and second choice runner Dortmund; both win contenders belong to three time Kentucky Derby winner Bob Baffert.

One thing is certain though, the guests at this year’s Kentucky Derby Festival (where attendance ranks first in North America and usually surpasses that of all other stake races) will be seated in style on The BOX Seat 903.

Every May sees Wentworth’s historic West Course play host to the final, and considered by most flagship, event on the PGA European Tour – the BMW [...]

This weekend sees the 141th running of the $2 million Kentucky Derby take place at Churchill Downs, Louisville and it promises to be one to [...]

MK Dons Chairman, Pete Winkleman, takes his new VIP BOX Seat as his team triumph in a giant-slaying 4-0 victory over Manchester United! In [...]