Spectators watch from BOX Seats as record books are re-written 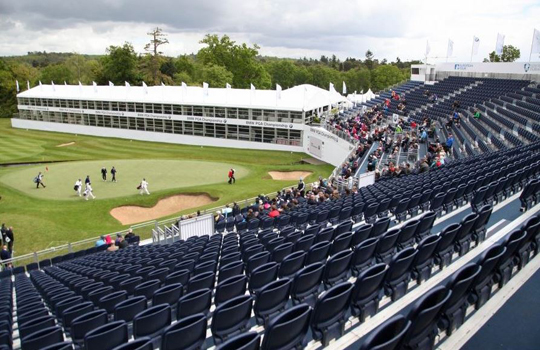 Every May sees Wentworth’s historic West Course play host to the final, and considered by most flagship, event on the PGA European Tour – the BMW PGA Championship.

This year it was the turn of 23 year old Korean, An Byeong-Hun, to take the win.  Commanding his first European Tour title in record-breaking fashion, An completed the course in an incredible 21 under par; beating the previous tournament record by two shots.

It was a momentous achievement for An who is only the second player to win the BMW PGA Championship in their rookie season.  The win means he moves from 132nd in the Official World Golf Ranking to inside the top 60, it also secures his place in the antidepressants US Open and Open Championship.

The lucky spectators watched the action live on the West Course from a spectacular purpose built grandstand, fully fitted out with the BOX Seat 901 complete with silent tip up – a feature ideal for sporting events such as golf, when silence is golden!

Every May sees Wentworth’s historic West Course play host to the final, and considered by most flagship, event on the PGA European Tour – the BMW [...]

This weekend sees the 141th running of the $2 million Kentucky Derby take place at Churchill Downs, Louisville and it promises to be one to [...]

MK Dons Chairman, Pete Winkleman, takes his new VIP BOX Seat as his team triumph in a giant-slaying 4-0 victory over Manchester United! In [...]